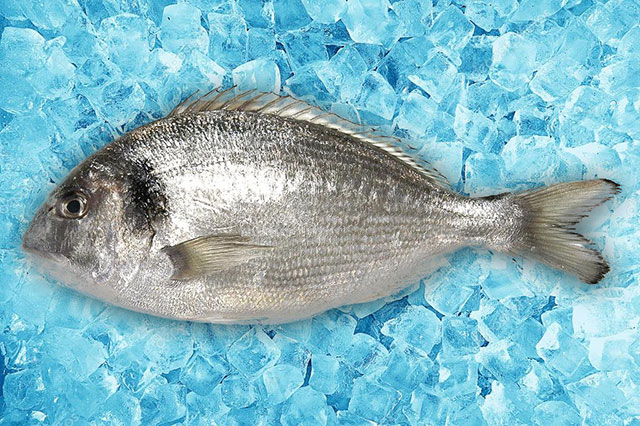 The gilt-head (sea) bream (Sparus aurata) is a fish of the bream family Sparidae found in the Mediterranean Sea and the eastern coastal regions of the North Atlantic Ocean. It commonly reaches about 35 centimetres (1.15 ft) in length, but may reach 70 cm (2.3 ft) and weigh up to about 7.36 kilograms (16.2 lb).[2]The gilt-head bream is generally considered the best-tasting of the breams. It is the single species of the genus Sparus – the Latin name for this fish[3] – which has given the whole family of Sparidae its name. Its specific name, aurata, derives from the gold bar marking between its eyes.

Gilthead seabream is an esteemed food fish, but catches of wild fish have been relatively modest, between 6,100 and 9,600 tonnes in 2000–2009, primarily from the Mediterranean.[4] In addition, gilthead seabream have traditionally been cultured extensively in coastal lagoons and saltwater ponds. However, intensive rearing systems were developed during the 1980s, and gilthead seabream has become an important aquaculture species, primarily in the Mediterranean area. Reported production was negligible until the late 1980s, but reached 140,000 tonnes in 2010, thus dwarfing the capture fisheries production.[5] Greece is the biggest seabream producer in Europe, followed by Turkey.

It is typically found at depths of 0–30 metres (0–98 ft), but may occur up to 150 m (490 ft),[2] seen singly or in small groups near seagrass or over sandy bottoms, but sometimes in estuaries during the spring.[2]It mainly feeds on shellfish, but also some plant material.