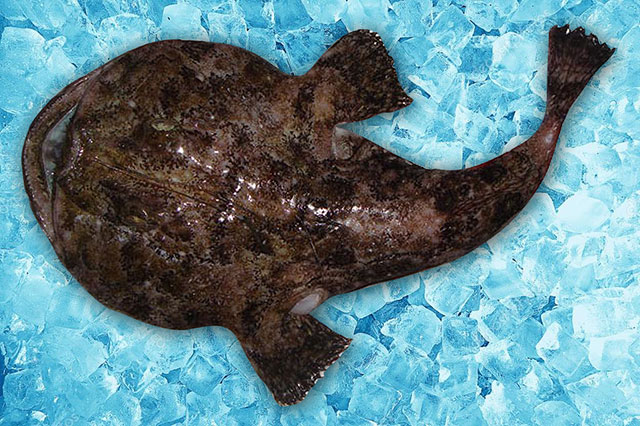 Lophius piscatorius, commonly known as the angler, is a monkfish in the family Lophiidae. It is found in coastal waters of the northeast Atlantic, from the Barents Sea to the  Strait of Gibraltar, the Mediterranean and the Black Sea. Within some of its range, including the Irish Sea, this species comprises a significant commercial fishery.

It has a very large head which is broad, flat, and depressed; the rest of the body appears to be a mere appendage. The wide mouth extends all the way around the anterior circumference of the head, and both jaws are armed with bands of long, pointed teeth. These are inclined inwards, and can be closed so as to offer no impediment to an object gliding towards the stomach, but to prevent its escape from the mouth.[3]The pectoral and pelvic fins are so articulated as to perform the functions of feet, so the fish is able to walk along the bottom of the sea, where it generally hides itself in the sand or amongst seaweed. Around its head and also along the body, the skin bears fringed appendages resembling short fronds of seaweed, a structure which, combined with the extraordinary faculty of assimilating the colour of the body to its surroundings, assists this fish greatly in camouflaging itself in the places which it selects on account of the abundance of prey. It has no scales.[3]Female anglers grow to a length of more than 2 metres (6 ft 7 in).

The fish has long filaments along the middle of its head, which are, in fact, the detached and modified three first spines of the anterior dorsal fin. The filament most important to the angler is the first, which is the longest, terminates in a lappet, and is movable in every direction. The angler is believed to attract other fish by means of its lure, and then to seize them with its enormous jaws. While it is considered probable that smaller fish are attracted in this way experiments have shown that the actions of the jaw is automatic and depends on contact of the prey with the tentacle. Its stomach is expandable and it is not unknown for these fish to swallow prey of their own size.

The spawn of the angler consists of a thin sheet of transparent gelatinous material 2 or 3 ft (61 or 91 cm) wide and 25–30 feet (7.6–9.1 m) long drifting freely in the water. The eggs in this sheet are in a single layer, each in its own little cavity. The larvae are free-swimming and their  pelvic fins are elongated into filaments.