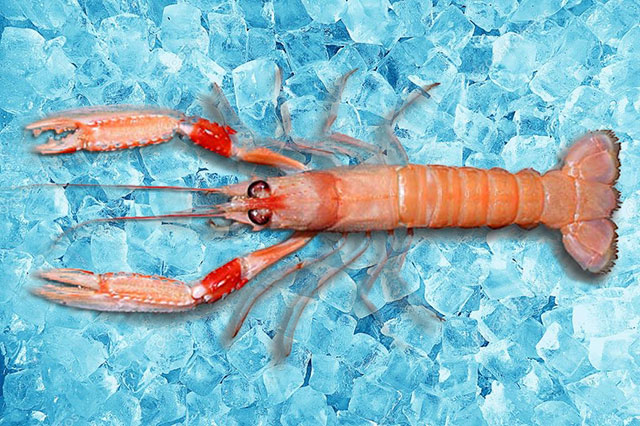 Nephrops norvegicus, known variously as the Norway lobster, Dublin Bay prawn, langoustine (compare langostino) or scampi, is a slim, orange-pink lobster which grows up to 25 cm (10 in) long, and is "the most important commercial crustacean in Europe".[3]It is now the only extant species in the genus Nephrops, after several other species were moved to the closely related genus Metanephrops. It lives in the north-eastern Atlantic Ocean, and parts of the Mediterranean Sea, but is absent from the Baltic Sea and Black Sea. Adults emerge from their burrows at night to feed on worms and fish.

Nephrops norvegicus has the typical body shape of a lobster, albeit narrower than the large Homarus genus.[3] It is pale orange in colour, and grows to a typical length of 18–20 centimetres (7–8 in), or exceptionally 25 cm (10 in) long, including the tail and claws.[4] A carapace covers the animal's cephalothorax, while the abdomen is long and segmented, ending in a broad tail fan.[4] The first three pairs of legs bear claws, of which the first are greatly elongated and bear ridges of spines.[4] Of the two pairs of antennae, the second is the longer and thinner.[4] There is a long, spinous rostrum, and the compound eyes are kidney-shaped, providing the name of the genus, from the Greek roots νεφρός (nephros, "kidney") and ops ("eye")

Nephrops norvegicus is found in the north-eastern Atlantic Ocean and North Sea as far north as Iceland and northern Norway, and south to Portugal. It is not common in the Mediterranean Sea except in the Adriatic Sea,[5] notably the north Adriatic.[6] It is absent from both the Black Sea and the  Baltic Sea.[3] Due to its ecological demands for particular sediments, N. norvegicus has a very patchy distribution, and is divided into over 30 populations. These populations are separated by inhospitable terrain, and adults rarely travel distances greater than a few hundred metres.

The typical life span of N. norvegicus is 5–10 years,[19] reaching 15 years in exceptional cases.[20] Its reproductive cycle varies depending on geographical position: "the periods of hatching and spawning, and the length of the incubation period, vary with latitude and the breeding cycle changes from annual to biennial as one moves from south to north". [3] Incubation of eggs is temperature-dependent, and in colder climates, the duration of the incubation period increases. This means that, by the time hatching occurs, it may be too late for the females to take part in that year's breeding cycle. In warmer climates, the combined effects of recovery from moulting and ovary maturation mean that spawning can become delayed. This, in turn, has the effect of the female missing out a year of egg carrying.

Adult male Nephrops norvegicus moult once or twice a year (usually in late winter or spring) and adult females moult up to once a year (in late winter or spring, after hatching of the eggs).[3] In annual breeding cycles, mating takes place in the spring or winter, when the females are in the soft, post-moult state.[22] The ovaries mature throughout the spring and summer months, and egg-laying takes place in late summer or early autumn. After spawning, the berried (egg-carrying) females return to their burrows and remain there until the end of the incubation period. Hatching takes place in late winter or early spring. Soon after hatching, the females moult and mate again.

The muscular tail of Nephrops norvegicus is frequently eaten, and its meat is known as scampi. The N. norvegicus is eaten only on special occasions in Spain and Portugal, where it is less expensive than the common lobster, Homarus gammarus. [24] N. norvegicusis an important species for fisheries, being caught mostly by trawling. Around 60,000 tonnes are caught annually, half of it in the United Kingdom's waters.

Besides the established trawling fleets, a significant number of fleets using lobster creels have developed. The better size and condition of lobsters caught by this method yield prices three to four times higher than animals netted by trawling. Creel fishing was found to have a reduced impact on the seafloor, require lower fuel consumption, and allow fishermen with smaller boats to participate in this high-value fishery. It has therefore been described as a reasonable alternative to demersal towed gears, and the allocation of additional fishing rights for this type of take has been suggested.

The North East Atlantic individual biological stocks of Nephrops are identified as functional units. A number of functional units make up the sea areas over which a total allowable catch (TAC) is set annually by the EU Council of Ministers. For example, the TAC set for North Sea Nephrops is based on the aggregate total tonnage of removals recommended by science for nine separate functional unit areas. This method has attracted criticism because it can promote the over-exploitation of a specific functional unit even though the overall TAC is under-fished. In 2016, the UK implemented a package of emergency technical measures aimed at recovering the Nephrop stock in the Farn(e) Deeps off North East England which is close to collapse. A 2017 assessment performed by the International Council for the Exploration of the Sea (ICES) indicates the beginning of biomass expansion, but that controls on fishing effort will need to continue at least until the biomass reaches a size that is sustainable when measured against the level of fishing activity by all fishers wanting to target the stock

Discards from Nephrops fishery may account for up to 37% of the energy requirements of certain marine scavengers, such as the hagfish Myxine glutinosa.[28] Boats involved in Nephrops fishery also catch a number of fish species such as plaice and sole, and it is thought that without that revenue, Nephrops fishery would be economically unviable..