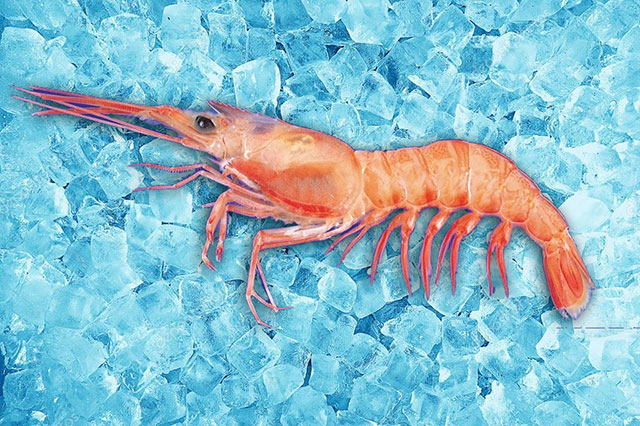 The following description refers mainly to the external anatomy of the common European shrimp, Crangon crangon, as a typical example of a decapod shrimp. The body of the shrimp is divided into two main parts: the head and thorax which are fused together to form the cephalothorax, and a long narrow  abdomen. The shell which protects the cephalothorax is harder and thicker than the shell elsewhere on the shrimp and is called the carapace. The carapace typically surrounds the gills, through which water is pumped by the action of the mouthparts.[16] The rostrum, eyes, whiskers and legs also issue from the carapace. The rostrum, from the Latin rōstrum meaning beak, looks like a beak or pointed nose at the front of the shrimp's head. It is a rigid forward extension of the carapace and can be used for attack or defense. It may also stabilize the shrimp when it swims backward. Two bulbous eyes on stalks sit either side of the rostrum. These are compound eyes which have panoramic vision and are very good at detecting movement. Two pairs of whiskers (antennae) also issue from the head. One of these pairs is very long and can be twice the length of the shrimp, while the other pair is quite short. The antennae have sensors on them which allow the shrimp to feel where they touch, and also allow them to "smell" or "taste" things by sampling the chemicals in the water. The long antennae help the shrimp orient itself with regard to its immediate surroundings, while the short antennae help assess the suitability of prey.

Eight pairs of appendages issue from the cephalothorax. The first three pairs, the maxillipeds, Latin for "jaw feet", are used as mouthparts. In Crangon crangon, the first pair, the maxillula, pumps water into the gill cavity. After the maxilliped come five more pairs of appendages, the pereiopods. These form the ten decapod legs. In Crangon crangon, the first two pairs of pereiopods have claws or chela. The chela can grasp food items and bring them to the mouth. They can also be used for fighting and grooming. The remaining six legs are long and slender, and are used for walking or perching.

The muscular abdomen has six segments and has a thinner shell than the carapace. Each segment has a separate overlapping shell, which can be transparent. The first five segments each have a pair of appendages on the underside, which are shaped like paddles and is used for swimming forward. The appendices are called pleopods or swimmerets, and can be used for more purposes than just swimming. Some shrimp species use them for brooding eggs, others have gills on them for breathing, and the males in some species use the first pair or two for insemination. The sixth segment terminates in the telson flanked by two pairs of appendages called the uropods. The uropods allow the shrimp to swim backward, and function like rudders, steering the shrimp when it swims forward. Together, the telson and uropods form a splayed tail fan. If a shrimp is alarmed, it can flex its tail fan in a rapid movement. This results in a backward dart called the caridoid escape reaction (lobstering).

Shrimp are widespread, and can be found near the seafloor of most coasts and estuaries, as well as in rivers and lakes. There are numerous species, and usually there is a species adapted to any particular habitat. [3] Most shrimp species are marine, although about a quarter of the described species are found in fresh water.[18] Marine species are found at depths of up to 5,000 metres (16,000 ft),[16] and from the tropics to the polar regions.